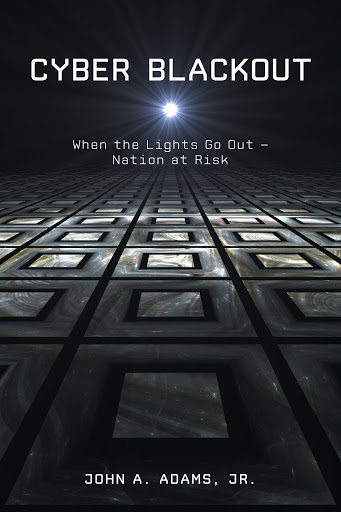 Cyber Blackout
When the Lights Go Out -- Nation at Risk by John A. Adams, Jr.

With over 140 countries fielding nation-state and rouge malious cyber hacking capabilities, it is critical that we are aware of threats and vulnerabilities.

Adm. Michael Rogers, director of the National Security Agency warned Congress regarding cyber attacks, “It’s only a matter of the ‘when,’ not the ‘if,’ that we are going to see something dramatic.”

Cyber Blackout is a warning. It is a chronicle of the cyber threats of which we find ourselves at risk every day. Our power supply is vulnerable. Our food supply. Even the basics of communication. Every facet of our national security is vulnerable to cyber threats, and we are not prepared to defend them all.

Cyber Blackout explains how these threats have been building since the Cold War, how they affect us now, and how they are changing the concepts of war and peace as we know them. It is essential knowledge for anyone wishing to understand safety and security in the age of the fifth domain.

Who is likely to make suitable provisions for the public defense, as that body to which the guardianship of the public safety is confided . . . which, by the extension of its authority throughout the States, can alone establish uniformity and concert in the plan and measures by which the common safety is to be secured?

All warfare is based on deception.

John A. Adams, Jr. was formerly president and CEO of Enterprise Florida and served on the Executive Committee of Space Florida. He received the 1986 National Exporter of the Year Award from President Ronald Reagan in the White House Rose Garden. As a past chairman of the Industry Sector Advisory Council he provided Congressional testimony on GATT, NAFTA, CAFTA, and on U.S.-Mexico cross-border infrastructure and trade issues.

Adams holds a Ph.D. from Texas A&M University and served as a captain in the United States Air Force and speaks nationwide on economic and industrial development, competitiveness, risk management, and cyber security trends.

Dr. Adams lives deep in the heart of Texas, where he has written a dozen books.