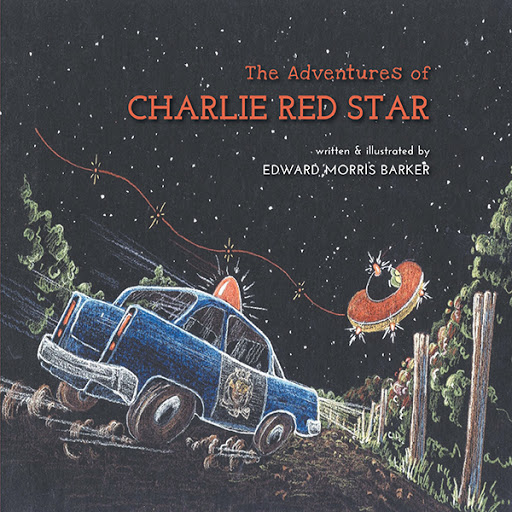 The Adventures of Charlie Red Star
by Edward Morris Barker

Charlie was what we Earthlings call a You-Eff-Oh, you know, a U.F.O., an Unidentified flying Object. He had been seen by two very surprised Earthlings on Thursday, April 10 1975 at about 9:10 p.m. local Earth time. Charlie was curious and he thought that this could be fun, so he decided to hang around to see what would happen next! Little did the Earthlings realize that they would soon be drawn into what was to go down in history as “The Adventures of Charlie Red Star”.

Edward had received a phone call in his Planetarium office about bright red lights that cavorted around the night sky over Carman almost every night. He visited Carman, interviewed many people and viewed photographs of some of these red lights. (See inside!) Edward wrote an article in the Manitoba Museum Paper about what he found. Later, he wrote an article for “Manitoba Nature” entitled; “Manitoba U.F.O’s”. When he came to the part about the Carman U.F.O., he thought it would be fun to write the story from the viewpoint of the U.F.O.! The newspaper had called the lights: “Red Star Charlie”. It did not sound right to Edward and so he changed the name to “Charlie Red Star”. Later, he wrote the story for children and anthropomorphized those strange red lights. He also made Charlie into a short Planetarium show so that Charlie could fly once more in the starry, starry skies above Carman!

Edward was born in Winnipeg, Manitoba, Canada and went to school in St. James, a suburb of Winnipeg, where he attended school first at Britannia School and later at the St. James Collegiate. Both of his parents immigrated to Canada from England before he was born. Their house was underneath the flight path of Winnipeg’s airport so he developed a passion for aircraft and flying. Later, as an adult, he satisfied his boyhood dream when he learned to fly! Edward finished High School at a Technical Vocational High School in Winnipeg. Before he graduated, he was hired as an apprentice Animation Artist at P.G.A. a local company that produced television commercials. He did graduate from Tec Voc by the way! He was convinced by some of the staff to attend The University of Manitoba School of Art. Later, he was hired by the newly opened Manitoba Planetarium in 1968, where he was to stay for thirty years. During his time at the Planetarium, he went on many field trips. He also met Charlie Red Star! Edward and his family travel extensively, always on their own, all over North America, England and Europe as well as Nepal, Tunisia and the Baltic countries. He is retired and still draws, paints and sculpts in wood and stone, writes and even flies radio controlled model aircraft. Edward and his family enjoy a large part of the year at their cabin somewhere on Lake of the Woods, Ontario! So that is Edwards story.