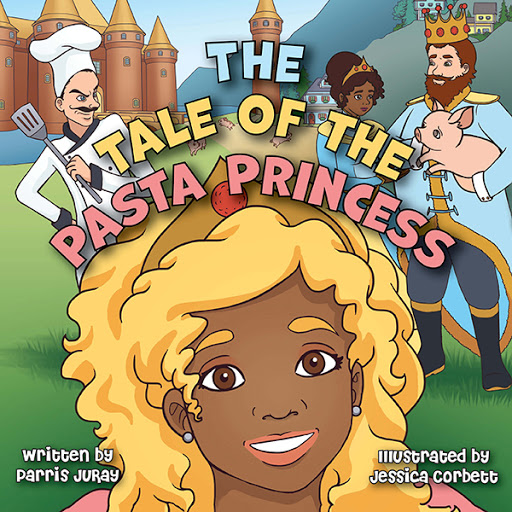 Once upon a mountain made of meatballs, in a village by the name of Tortellini Town, sat a pasta palace. And in the palace lived a princess. Before the princess was born, the palace’s famous chef—Chef Eville—granted the king and queen a gift: a magical recipe that transformed everything the princess touched into pasta. The king and queen knew their people had no food and agreed to accept the gift, but it proved more dangerous than they could have imagined. By the time the princess was just a little girl, everything she touched turned to pasta—even the king’s throne! Fearing for the safety of their kingdom, the king and queen locked Pasta Princess away in Rigatoni Tower. But on the princess’s ninth birthday, she made a wish that her powers be used to feed the hungry people of Tortellini Town, and her powers were transformed. Finally, in control of her powers, the princess was released from the tower and the towns people’s hunger was resolved! That is . . . until Chef Eville wreaked havoc once more, turning everyone in Tortellini Town into pigs!

Will Pasta Princess be able to defeat Chef Eville? Can she save her parents and the people of Tortellini Town?

Follow along in The Tale of the Pasta Princess to discover what happened next!

Parris JuRay is a Canadian artist and author from Vancouver Island, British Columbia. A creative spirit, Parris originally had ambitions to become a napkin designer. However, inspired by Scooby-Doo—the 2002 live adaptation of the cartoon—Parris’s focus shifted, and his love for film and television grew. After seven years of working as a background performer for companies such as Disney and Hallmark Channel, Parris began his writing career. His publication The Tale of Pasta Princess is his foray into children’s books, but he’s also penned screenplays and short stories.