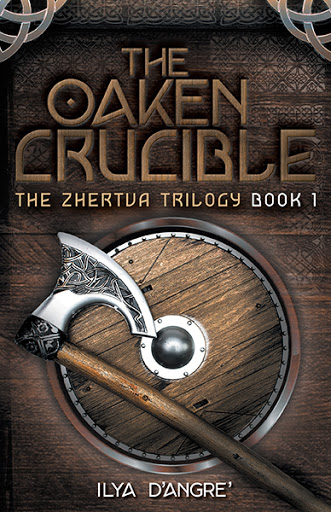 The Oaken Crucible
by Ilya d'Angre'

It is the late seventh century, and the world is a violent place, steeped in blood and legend as Viking merchants traverse the Black Sea and war against neighboring tribes. Near the turbulent waters of the ancient Slavuta River, a boy named Azurr is born to a powerful jarl and a sorceress mother. Still an infant, his prophecy arrives in the middle of a storm, beneath the light of a burning tree. The innocence of his youth is short-lived, however, as the gods play a trick on him that leaves blood on his hands and lies behind his eyes. Thus initiated into the world of men secretly and unexpectedly, Azurr learns the ways of war, ever-seeking to impress his powerful father; however, he also remains curious about the powers of the gods, haunted by surreal dreams and befriending a mysterious merchant woman whose powers mirror those of his mother. As the ship of his life navigates him into foretold but unforeseen greatness, Azurr must travel over both land and sea, testing the limits of his mind, while spurning his berserker’s rage, and shaping his legacy within the dual realms of myth and steel.

The Oaken Crucible, the first book in Ilya d’Angre’s The Zhertva Trilogy, is a spellbinding epic that will delight fans of mystery, fantasy, and Norse history and mythology. Through the mind and eyes of Azurr, our thoughtful and fierce protagonist, readers get a unique glimpse of a long-past era that influenced the shape of the Western world.

Ilya d’Angre’ has been a reader and a wordsmith since his youth. He has been recognized for his exemplary vocabulary and writing abilities since high school, and he attained a degree from Wittenberg University that included advanced creative and expository writing classes. He has worked as an art director, a teacher, a contractor, and a regional sales manager, all of which left him with plenty of time to read; as a result, he has accumulated a vast library over the years with an emphasis on early and medieval history, and his favorite authors include Herodotus, Homer, Joseph Conrad, and Mark Twain.

The Zhertva Trilogy, his first series of publications, emerged from his ruminations on the presence of Quetzalcoatl, the pale-skinned bearded god, in pre-Columbus Mesoamerica, and the protagonist’s travels provides a hypothesis for this. The two books forthcoming are Shackles of Wind and Dreams of a Blood Moon. Ilya currently lives with his wife and miniature pinscher in Michigan.