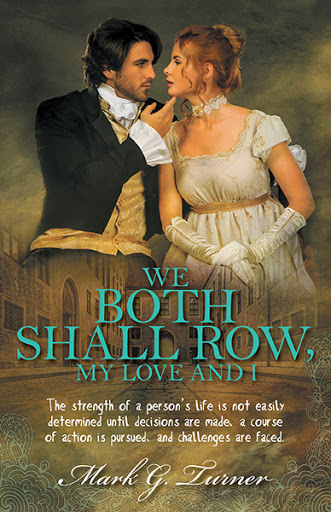 We Both Shall Row, My Love And I
by Mark G. Turner

Michael would have been content living out his days in the peacefulness of his quiet mountain hamlet. The complexity of urban living and the activities of sinister criminals, never reached their sleepy village. This would all change when an evil family, lacking a moral compass, would challenge their peaceful way of life. Eighteenth century Georgian, England, was a dangerous spider's web of complex relationships, diverse communities, and compelling business interests.

Confronted by the maliciousness of the wicked, Michael's sense of morality would serve as the battleground for his growth as a man.

Michael, the confident musician, would find himself thrust out upon the turbulence of a more challenging life by two things: the cancer of criminal intrigue and the consolation of tender romance. He would explore what it would mean to share a deep relationship. He would learn that love is so much more than romance.

For Michael, much like a ship, greatness wouldn't be discovered until it had weathered perilous storms and survived desperate battles.

The strength of a person’s life is not easily determined until decisions are made, a course of action is pursued, and challenges are faced. 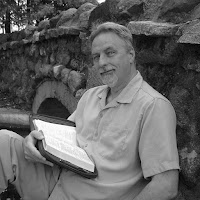 Mark G. Turner and his wife, Emma Marie, are active participants in a local church in Canada. And have served as Bible teachers, counselors, and leaders in a variety of settings. They have served in Canada, the United States, the Bahamas, Great Britain, the Philippines and recently the People's Republic of China. Mr. Turner has been a worship leader, elder, Bible teacher for international students, and for Chinese Christians.

Mr. Turner has taught Bible at the college level, English at the university level, has been a public school teacher, and a social worker. He is a graduate of Briercrest College and Seminary, the University of Waterloo, York University, and the University of Leeds (MMU, music composition).

If you have found the novel, We Both Shall Row, My Love And I, interesting and would like study questions about character development, descriptiveness, atmosphere, structure, spirituality, (including Biblical references), please contact me.

His previous book, The Lord Is My Song, is a series of music devotionals for worship leaders, Christian musicians, and all who love to worship our Lord. It is available on Amazon in both hardcopy and electronic form, and in some bookstores.

Mr. Turner, as an orchestral composer, has had his music premiered in the United States, Canada, Great Britain and the People's Republic of China. A limited sampling of some of his smaller ensemble compositions can be heard and purchased through sheetmusicplus.com by simply entering his name, Mark G. Turner, into the search box. Contact him directly and request a sampling of his works for full symphony orchestra.