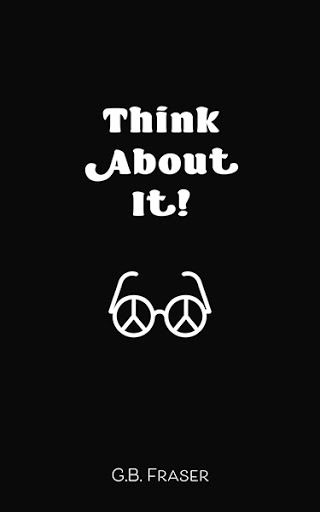 Think About It!
by G.B. Fraser

The Author commenced this book in 1980 when John Lennon was shot. He lived in Liverpool and as a big Beatles fan, the author wrote down a comment that somebody said, when everybody stopped dead in their tracks, with their head down. It is the first comment, see if you can find it. This gave the author an idea, and so he continued writing comments for 40 years. They come from many people, and the comments were re-written in his own words, so as to not quote anybody. The book is designed for the reader to “Think About It” You have the choice of agreeing or disagreeing with what is said in the comment. We hope it will get your nose out of the phone and start some educational conversation, with your friends, or with your family at the dinner table! The book is not the Authors own thoughts or his point of view on the World.

Mr. Fraser grew up in West Vancouver to an original pioneer family. He lived in Liverpool 62-65 when his Colonel Father was working with Military Intelligence. His parents met Ian Fleming at the Palace in London, and never thought they’d meet James Bond. The Frasers were homesick and moved back to Vancouver in 1965. The Author was in Army Cadets 72 to 75 and learned what his Father did in training, but decided not to join the Army. During the school years, he did various sports at a local country club. Starting with The Beatles, and British Invasion records, he then started collecting movies with the birth of VCR’s. In 1966 his Father was a founder of Variety Club of B.C. The author was Chairman of various special events for Young Variety and fundraisers. He worked on the Annual Telethon, and was a big brother for all of the 70’s and 80’s. He is married with a son and daughter.