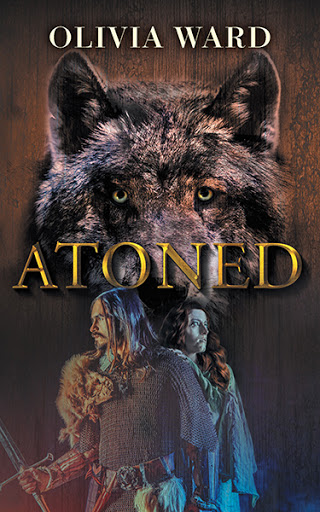 Set in a Medieval background, Atoned is a story of love, murder, revenge, and atonement.

Darias, son of a high-ranking Northern Realm Wolf Lord, has been betrothed since childhood to Keara, who is from a noble Southern Realm family. Dreading the forthcoming marriage that will be thrust upon him, Darias would much rather be wed to his childhood sweetheart, the sly Rowena. His dismay turns to delight upon hearing Keara and her family have been treacherously murdered by outlaws. However, Keara’s body is not found amongst the dead.

Mercenaries hired by her grandfather, who has never given up hope, locate Keara years later. The soldiers, paid a handsome sum in gold by a shadowy figure to do away with Keara, double-cross the individual and return Keara safely to her grandfather in the Southern Realm.

Much to the displeasure of both Darias and Keara, the marriage contract between the two has remained valid and, to their displeasure, are forced to marry against their will.

Bitterness and hatred turn into a flaming brand of passion only to be marred by uncertainty as villages are plundered by mysterious outlaws, assassination attempts on both and, the persistent return of the wily Rowena, who continuously attempts to seduce Darias, and will stop at nothing to have him.

When Keara is kidnapped and a plot is uncovered to overthrow the governments of both Realms, Darias races to rescue his wife before the Realms and their lives are destroyed.

OLIVIA WARD WAS born and raised in Toronto, Ontario and, after working in the city for a number of years, traded in the bright lights and fast pace of city life for country living. Oliva lives on a large wooded property, with her husband and their two crazy Siamese cats, where she attends community events and outings, enjoys cooking, watercolor painting, gardening, long walks, fishing and nature.