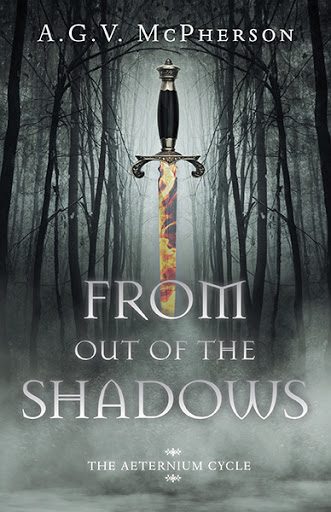 From Out of the Shadows
by A.G.V. McPherson

"Believe me when I say, if you do not fear Dark Elves, you are a fool, for there is much to be afraid of."

Silmanus and Mara are the unlikeliest of allies: an elven wizard and a human outlaw. Plunged together in a struggle for survival, desperation and necessity form an uneasy alliance between elf and human, an alliance challenged by the most lethal warriors in Aeternerras—the sinister Dark Elves. Much to his astonishment, Silmanus discovers his lowly views towards humans are misplaced as he fights side-by-side with them as equals. But could a wizard and a human have anything in common?

"As you are not an Arcanist—that is, someone who uses magic—you are probably under the impression that living things have souls or spirits."

On the other side of the world, companions Amber and Jeddo—dwarf and gnome—have devoted their lives to hunting down monsters that escape The Fell Lands, naturally reaping the profits that this profession brings. Their ventures become far more trouble than they are worth when the two are taken captive by Dark Elves becoming entangled in a web of death and deceit.

"Growling, Amber pushed herself to her feet, but Mordasine’s boot shoved her back down. 'On your knees, filth,' he hissed."

In From out of the Shadows, blood is spilled and tears are shed as these four fight for freedom. Many questions remain, questions of trust, motivations, and uncertainty. One question supersedes them all, "What are the Dark Elves plotting – and what other evils are lurking in the shadows?"

"This book was an exciting and quick read. The author took care to write detailed settings, character backgrounds, and history that pave the way for more books in this series. The characters are rich and each unique. While the book bounces between two very different parties, it's interesting to speculate on how and when their paths will eventually cross.

The young author has a talent, and I am looking forward to reading the second installment in his series!"

"Captivating and exciting read. A world has been built and characters very well established . I cannot wait to read the second book!"

"This story was amazing, easy to follow and suspenseful! I look forward to reading book 2!" 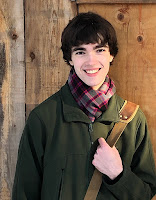 A.G.V. McPherson is an avid reader of fantasy and player of fantasy games including Dungeons & Dragons. It is fitting, then, that he should write a novel in this beloved genre. Mr. McPherson has previously written many unpublished short stories and a novel and has also won academic awards for English on three occasions.

From Out of the Shadows is the first of four books in “The Aeternium Cycle" series.

Born in Timmins, Ontario, A.G.V. McPherson now lives with his family in Corbeil, Ontario, surrounded by a myriad of trees and a plethora of pets, including a dog, a gecko, a rat, and some fish.

From Out of the Shadows has been nominated by our staff as one of their favorite books.