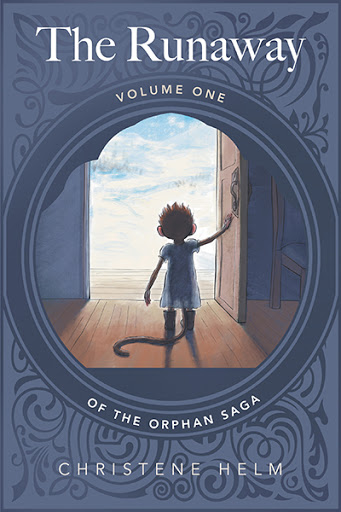 The Runaway
by Christene Helm

In this first installment of the Orphan Saga trilogy, a spunky young monkey named Mysti escapes from a devious gang of rats and finds a new home among the rabbits of the idyllic Reanlands. Not knowing where she came from or where she belongs, she struggles for a time to adapt to a new way of life and integrate into the rabbits’ society—a challenge that is intensified by the Reanlanders’ distrust of strangers, and of monkeys in particular. With the support of new friends, Mysti perseveres to overcome these obstacles, and is finally embraced by the rabbits when her ingenuity saves them from a near-certain death.

When Mysti speaks to the wise keeper of all rabbit lore, she discovers that the moonstone she has always worn around her neck is, in fact, a long-lost treasure very precious to the Reanlanders. She begins to realize that perhaps it was no accident that she wound up there—it may have been destiny calling her.

But how long can Mysti evade recapture by the rats, who are certainly trying to track her down? And will her grit and determination be enough to save the Reanlanders again, when war and upheaval threaten to disrupt their peaceful lives?

Christene Helm grew up in the wild countryside of North Yorkshire in England, a magical and enchanting landscape that has long been the inspiration behind some of the world’s most beloved works of literature. Her grandfather, a woodsman, instilled in her a love of nature and fantasy, and she grew up imagining stories about her woodland creature neighbors. The Orphan Saga originated as a story told to her young daughter, who was adopted from Peru and often struggled with feeling like an outsider. Christene’s first book, The Monkey’s Tale, was published by Whyte Tracks/Mill House in 2016.

She has a bachelor’s degree in biochemistry and a graduate degree in Chinese medicine and now lives in Pasadena, California with her three border collies. Her home is always open and welcoming to any stray creatures that find their way there—by accident or destiny.